A run chart is a running record of process behavior over time. It is the prototype of the control chart developed by Walter Shewhart, used to help people understand variation in their processes. It is simple to construct and analyze, requiring no statistical calculation. You can build a run chart on grid paper or with computer software. The X-axis (horizontal) is your measure of Time or the sequence in which the data are collected; the Y-axis (vertical) is your measure of interest. This example (thanks to Dan Ellsbury’s CQI Workshop at the TIPQC Annual Meeting, 2009) shows the beginning of a Run Chart on Hand Hygiene Compliance:

THE MEDIAN. With the run chart, the measure of central tendency or center-line is the MEDIAN—the point at which exactly half the points are above and half are below. To find it, either order all the data from high to low and locate the middle point; or use the “ruler method,” by sliding a straight edge from the top to the bottom, where half of the points are above and below the line. Draw the Median on your chart.

RUNS. The first step in analyzing a run chart is to identify the RUNS. A RUN is defined as “one or more consecutive data points on the same side of the median, ignoring points exactly on the median.” Circle each of the runs on your chart.

RUNS TESTS. The purpose of runs tests is to determine whether a process exhibits only (1) COMMON CAUSE or (2) COMMON and SPECIAL CAUSE variation. Collection of 25 data points is powerful enough to identify special causes with RUNS TESTS. (Carey, 2002).

COMMON CAUSE/SPECIAL CAUSE. SPECIAL CAUSES are sources of variation that are unusual and not inherent in the process. Special causes arise from odd circumstances, such as an weird day or an extremely sick baby. Special causes render the process unstable and therefore unpredictable/unstable: this means that any action you take to improve the process will not produce predictable results. Instead it will only increase variation and waste resources. The better approach is to investigate the special cause, and incorporate it if it is good; eliminate it if it is undesirable.

With COMMON CAUSE only, a process is considered to be stable and predictable with certain limits—the variation is inherent to the process itself. Variation is neither good nor bad. With only common cause variation, the process behavior still may be unacceptable and in need of change. Introduction of a CHANGE is considered to be creating a special cause—with the intention of moving the process behavior in the direction of goodness.

RUNS TESTS. Although there are 37+ tests of special cause, we will focus on the four taught by Dan Ellsbury at our Annual Meeting 2009 and a fifth rule from Carey & Lloyd (2001): 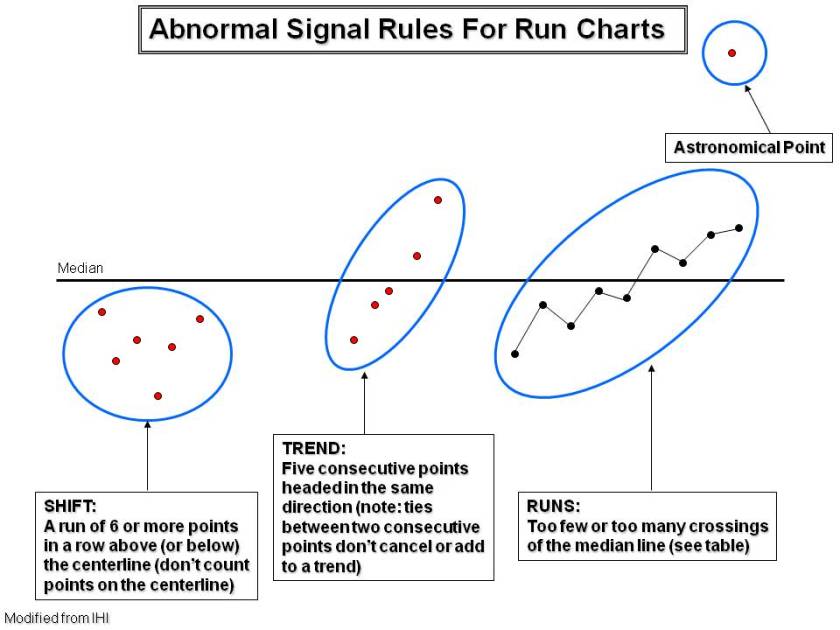 Rule 1. SHIFT. Six or more points within a run, on either side of the Median, ignoring points on the Median. This means that the run is too long.

Rule 2. TREND. An unusually long series of consecutive increases or decreases in the data, with 5 or more heading in the same direction. Count points of the Median, but ignore points that repeat the preceding value.

Rule 3. TOO FEW OR TOO MANY RUNS means too much or too little variability to be purely random. Counted by the number of times the data points that cross the Median and add one (1). Make reference to a table, such as below, and if your count is outside the normal number of runs, you have evidence of special cause. 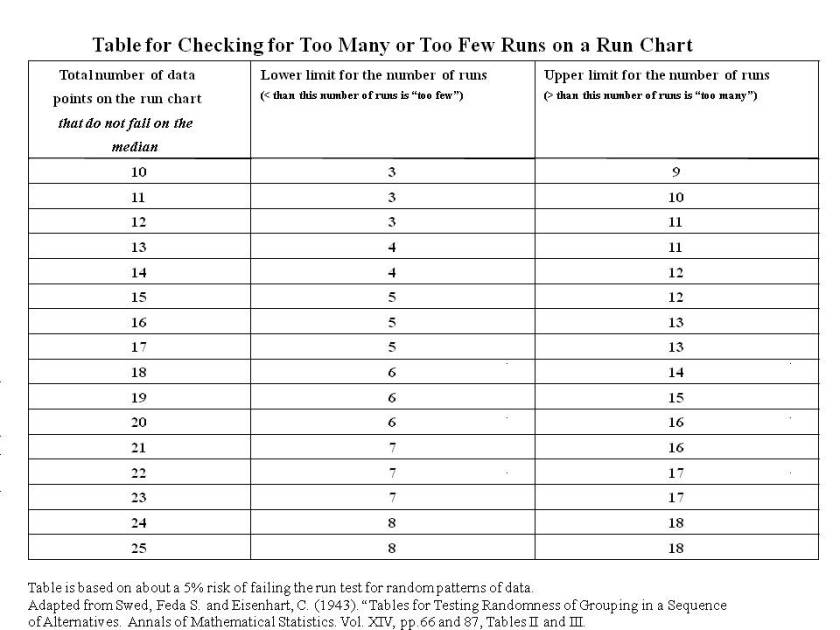 Rule 5. PERSISTENT PATTERN. A pattern is a repeating configuration of dots, e.g., up-down, up-down–that repeats eight or more consecutive times. This is very common in thermostat tampering—one person wants it cold, another wants it warmer. Or one shift does a procedure a certain way; another does it a different way.

Failing any of the runs tests is evidence of special cause. Special causes should be investigated and either incorporated or removed, to stabilize your process and make it predictable. Then you are able to introduce changes.