While there are many types of control charts or Shewhart charts available, the most commonly used type of control chart deals with single measurements taken over time and plotted in a similar fashion to a run chart. In this case the subgroup size is considered one. This type of control chart is called an “Individuals chart.” Sometimes this may be referred to as an “I chart” or “X chart.” Like a run chart, an Individuals chart plots data over time, but in addition, statistical decision limits are added. These are referred to as control limits, because they help you to better control the process and define what your process is capable of performing. The primary purpose of these limits is to distinguish typical variation, known as common cause variation, from unusual variation or special cause variation. Since all systems have variation, we need tools (control charts) to distinguish between these two types of variation. So if the process you are trying to improve is temperature of infants after birth, the individuals chart will help you determine when to react. In other words, it will help to prevent you from over-reacting when only common cause variation exists.

The control limits on the Individuals chart are determined from the data — the temperature values. The limits are not necessarily the allowable temperature limits that an outside agency or committee determines to be an acceptable range. For example, the World Health Organization might set an upper acceptable limit (maximum temperature) and a lower acceptable limit (minimum temperature.) Unlike a run chart where the median of the data is plotted, the center line on an Individuals chart is the average or mean of the data.

Consider the following data where the temperature was taken of each newborn after birth.

An Individuals control chart from this data will look like the one displayed below. 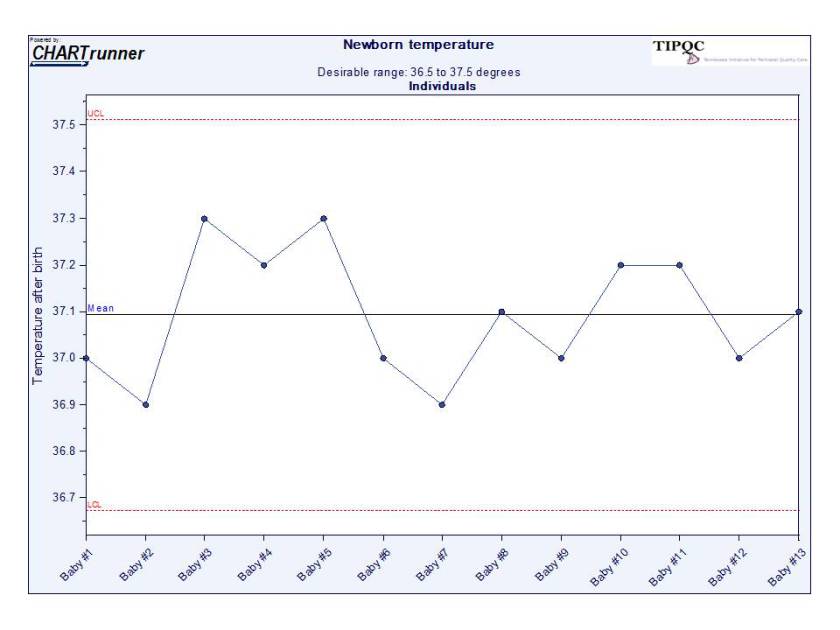 The Individuals chart will help you separate common causes from special causes by additional testing rules not available with the run chart. There are a few commonly used rules that you should start with. As the need arises, these can be expanded to more complex rules. Keep in mind that the purpose is to help you know when to make adjustments to the process.

Once the Individuals chart is completed, you should first determine if anything is considered out-of-control or if anything violates any rules that are being used. If no rules are broken, the process is said to exhibit only common cause variation. The chart above shows only common cause variation since no rules are violated. The next step is to see how the process is performing in relation to an upper and/or lower specification limit. In the temperature chart above, if the WHO determines that the maximum and minimum allowable temperatures are 37.5 and 36.5, the process is statistically stable and it is acceptable since the newborn temperature values are between the upper and lower specification limits. This essentially means that the temperature is predictable and it is predictably acceptable. Thus unless a change is made to the system, the process is expected to remain similar to the past.

To get even more value from the data, an Individuals chart is often combined with a “moving range.” The moving range chart is simply a plot of the variability between one sample and the next sample. In the chart shown above the variability will come from the absolute difference in the first temperature to the second, |37.0 – 36.9| = 0.10. Then the absolute difference in the second temperature to the third, |36.9 – 37.3| = 0.40, etc.

For a clever review of control charts and special/common cause view http://youtube.com/user/PQsystems

Process improvement (PI) or statistical process control (SPC) software is available which makes these charts rather simple to create and interpret. CHARTrunner is the preferred software to help you better understand your data through control charts. CHARTrunner can be downloaded and used from this URL and evaluated on a 30-day trial basis.
http://www.pqsystems.com/products/SPC/CHARTrunner/CHARTrunner_Statistical_Process_Control_Software.php