Eleven delivery hospitals representing 48% of deliveries in Tennessee joined the collaborative effort in 2012, and by the end of 2013 increased the project wide aggregate TJC PC-05 from 37% to 42%, a relative increase of 13.5% . (Wave 1 preliminary provisional QI data at right.) In late 2013, project teams voted to continue work on implementation of the 10 steps to successful breastfeeding.

In collaboration with the Tennessee Department of Health and the Tennessee Hospital Association, and with additional funding from the Centers for Disease Control and Prevention, Wave 2 was started in 2014 with a second enrollment period to allow additional facilities to join the collaborative effort. The Wave 2 aim seeks to increase exclusive breast milk feeding at discharge by 10% relative to the new Wave 2 baseline that aggregates TJC PC-05 data for all Wave 2 participants. Eighteen Wave 2 teams concluded the active improvement phase of the project at the end of 2015 having improved aggregate TJC PC-05 rates from 40.9% to 44.8%. Provisional analysis of preliminary data from the 2016 sustainment phase shows stable TJC PC-05 rates for the 9 teams that submitted sustain­ment data. 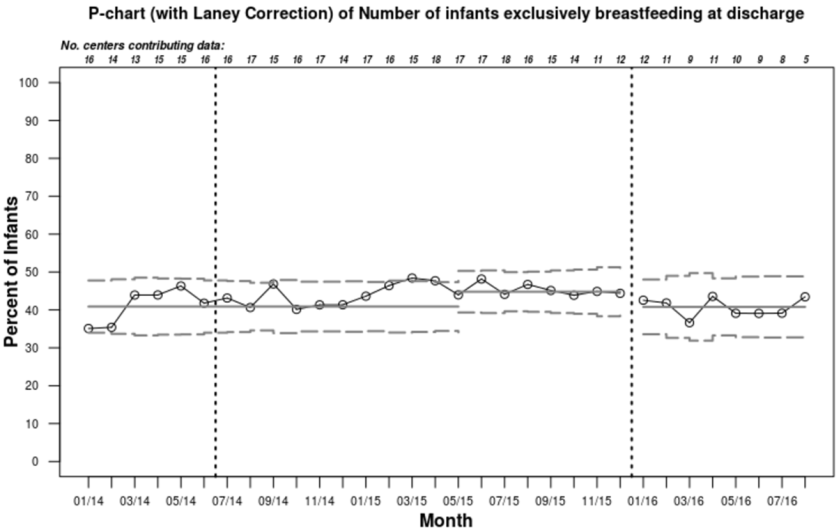 Immediate aim: Thus, we seek to increase the fraction of infants who are exclusively fed breastmilk at hospital discharge by 10% by March 2013 (Wave 1), and again by December 2016 (Wave 2.)